The Effect Of Using Absolute And Relative Strength Exercises To Develop The Mechanical Abilities Of The Arms And Legs, Mechanical Rhythm And Accuracy Of Fluctuant Smash Service And Blocking Wall Skills In Volleyball

The Effect Of Using Absolute And Relative Strength Exercises To Develop The Mechanical Abilities Of The Arms And Legs, Mechanical Rhythm And Accuracy Of Fluctuant Smash Service And Blocking Wall Skills In Volleyball

Volleyball is one of the most important sports in terms of practice and suspense. It is practiced all over the world and the possibility of practicing t anywhere, whether in closed sports halls. Or in the open yards, the level of technical performance in volleyball depends on the strength that the athlete can produce in his muscles and must be attributed to body weight which is known as relative muscular strength. On the other hand, the Absolute Power of these muscles is absolute against an external strength other than the weight of the body, which has a relationship between the maximum strength and its physiological section. "The nature of performance in the game of volleyball is characterized by its successive and sequential skills that require a high level of accuracy in performance. This is what strengthens players to adapt and prepare for those situations, including having physical, skill, and mental capabilities that are commensurate with the variables in the (Hassanein, Measurement and Evaluation in Physical Education and Sports, 1995).

The importance of the study came to develop the level of ability and mechanical rhythm of the arms and legs of volleyball players, which is reflected in their performance of the skills of Fluctuant Smash service and blocking wall, which are modern skills that must be trained according to their motor path and correct mechanical conditions for the player to be able to apply the skill Well, therefore, we seek to develop the skills of our players and make them represent Iraq in volleyball in forums and participations.

There is a lack of use of strength by using Absolute exercises, despite their importance in the field of sports training, the skills of Fluctuant Smash service and blocking wall are important skills to get a direct point, so the researcher worked to study this problem by emphasizing the exercises of Absolute Power And relativity, to put the appropriate solutions to it and to develop the mechanical ability of the arms and legs, and the accuracy of the Fluctuant Smash service and blocking wall skills in the game of volleyball.

1. Identify the level of ability and the mechanical rhythm of the arms and legs.

2. Recognizing the effect of absolute and relative strength exercises in developing the ability and mechanical rhythm of the arms and legs, and the accuracy of my skills in Fluctuant Smash service and blocking wall for volleyball players.

1. There are statistically significant differences between the pre and posttests in developing the ability and mechanical rhythm of the arms and legs, and the accuracy of the performance of the Fluctuant Smash service and blocking wall skills of volleyball players.

The human field: a group of players from the National Center for Volleyball Sports Talent for the 2021-2022 season,4-18-2021 until 7-6-2021, Spatial domain: The Specialized Volleyball School at Al Shaab International Stadium.

The researcher used the experimental method,

• HP laptop computer with the use of the Dartfish program for power analysis.

• A medical scale (Ketecto), made in Japan, with heavy straps placed (hand and legs), numbering (20).

Note: the player must touch the ground during the throw.

The test observer gives each player two attempts to calculate the result of the best attempt and record the distance in meters from the starting line to the place where the ball falls, and calculate its time, The time of the instantaneous thrust of the arm is calculated from the moment the arm moves with the ball to the moment the ball is left, and the power is calculated in watts through the following law.

The temporal rhythm is the measure of the ratio or proportionality between the parts of the movement, and it is necessary by finding the time lengths of the parts of the movement, where the closer the tempo is to zero, it indicates the ideal in the performance, and based on the previous test and let there be one kinetic sequence, the rhythm of the beating movement was extracted as follows.

Figure 2. Method Performing a Test to Measure the Accuracy of the Individual Blocking Wall Skill from a Center 2.

It was conducted on a sample of (5) players, on Saturday, 4/18/2021, as the exploratory experiment is a “practical training for the researcher to find out for himself the negatives and positives that he encounters while conducting the tests to avoid them in the future” (Al-Mandalawi & others, 1989)).

Exercises used: The researcher prepared absolute and relative strength exercises aimed at developing some mechanical abilities, mechanical rhythm, and accuracy of the (serve & blocking wall skills). The exercises proposed in Appendix (1) began on Thursday (23/4/2021) and until Tuesday (2/6 /2021), and for six weeks, at a rate of (3) training units per week on days (Saturday,Monday, Wednesday), a total of (18) training units, the total time of the training unit ranges between (35-40) minutes, in the period of special physical preparation From the main part, with a load intensity ranging from (90-100%), with repetitions of (6-10), as for determining the intensity by adding weights to the striking arm and legs, depending on the mass of the arm and legs during the exercise.

Training according to the length of time indicator:

The exercises were applied using rubber ropes, jogging exercises of all kinds, and other exercises, and the intensity and repetitions were determined.

Display, analyze, and discussion of the results

Display the results of the explosive abilities tests of the arms and legs of the two tests: The statistical program (SPSS) was adopted to process the results (Table 1).

Table 1 shows that the study sample has developed in the mechanical ability of the arms and legs, this development is evidence of the improvement of the working muscle groups of the arms and legs, which is reflected in the increase in strength and the performance of the maximum possible degree of strength in the shortest time, the study attributes this development as a result of Absolute and Relative Power exercises, as it included regulated repetitions and intensity for physical and skill exercises, with an added weight, as in throwing the medicine ball, using a boxing bag weighing (5) kg, and using the ball suspended with a rubber rope and fixed with a weight from below, which guarantees the player stability of strikes and a good level of performance. The player can be Performing strikes in a short time and training with weights that combine the arms and legs, which are qualitative exercises, which (Ayad and Hussam, 2011) referred to as “one of the basic exercises with a strong connection to the nature of the technical performance of skills in practiced sports activities, but on the condition that resistance is added when performing" (Hamid & Mohamed, 2011) (Table 2).

Table 2 shows the values of arithmetic means, standard deviations, and a difference of arithmetic means, standard deviations, calculated (t) value and level of significance of the research sample in the pre and post-tests of values of the temporal rhythm of Fl. The sample members have achieved differences in the time-rhythm variable for the skills of Fluctuant Smash service and blocking wall, The exercises that were applied within the time-rhythm exercises have effectively contributed to the level of performance, which helped the player move his body parts in the correct movement path to achieve the highest amount of strength, and took into account Matching and similar exercises of applications to the kinetic form and the correct path required for the real performance as much as possible. Each movement has its rhythm and the rhythm can be discovered superficially and through professional trainers who specialize in the game. The compatibility between the biomechanical rhythms of the movement with the player’s rhythm, as happens when performing the skill, so the player must be in the appropriate place when performing the serving and blocking wall skills.

In the interaction between time and strength in the movement parts, we are talking about the states of relaxation and contraction in the muscles which can be organized by feedback using (music, claps, whistles, and counting). This weight is one of the percussion tools or training on the biomechanical rhythm of movement, and these tools are very important in this field.

To obtain the highest amount of strength, it must be consistent with matching the doses of this strength to the required movement to the performance time that must be suitable for the use of this strength in consideration of the speed of movement” (Thomas R & Bamey, 1999)

Display, analyze, and discussion of the accuracy of the skills of Fluctuant Smash service and blocking wall, for the two tests (Table 3).

There are changes and differences resulting from the application of Absolute and Relative Power exercises, and this means that the development of the explosive ability of the arms, and the jumping force directly affect the delivery of the ball to the right place, and high accuracy while performing the skills of Fluctuant Smash service and blocking wall. The study attributes the reason for the development to the proposed exercises, as the volleyball player performs complex movements such as throwing the ball, jumping, and then hitting, and this is what agreed with the opinion of (Mohamed Hassan, 1994), when he indicated that “the volleyball player needs strength for the muscles of the arms and legs so that He can jump high to hit the ball quickly.” (Allawi, 1994) The reason for this development is due to the mechanism in which these two skills are performed and the frequent performance of volleyball players during the match, which play a decisive role in the results of matches as a result of the mistakes made by the defenders of the opposing team, It is not possible to master the motor performance (technical) in any sporting activity without possessing the physical characteristics of that activity, and this is what was agreed with (Ibrahim Khalil, 1992,), as he indicated" that the level of skill abilities develop through the development of their physical abilities" (Al-Hasani, 1992).

1. Strength training by stretching had a positive effect on the variables studied in the sample.

1. The necessity of using the training methods (under discussion) in training the remaining volleyball skills to identify their effectiveness in achieving the best development.

2. Paying attention to skill performance, especially the skills of the ace and the blocking wall. 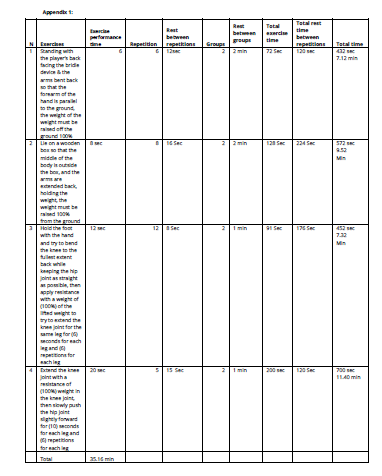 Abdul Razzaq Kazem Al-Zubaidi; The effect of a proposed curriculum for special muscle strength in developing some special requirements skills on the floor movement carpet: (Ph.D. thesis, University of Baghdad/College of Physical Education, 1999).

Ibrahim Khalil Al-Hasani; Physical abilities and their relationship to the level of skill achievement among volleyball players, Journal of Physical Education, University of Baghdad, Volume 13, 1992.